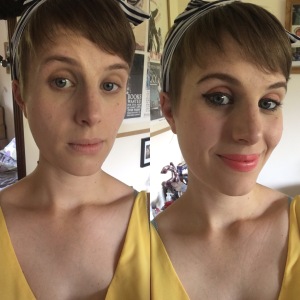 I had a really terrible night of sleep (well, lack thereof) last night, coming off the back of 2 or 3 similarly terrible nights, and almost 17 months of mostly broken nights, some worse than others. I really struggled to drag myself out of bed this morning when J’s cheery babbling and smacking of my face indicated he was ready to get up and play. (On that note this is much less good than the lovely Jeeves alarm clock I used to have). After a massive cup of tea in a mug which more closely resembles a bowl, and taking out some of the grump by bitching about Bing and his latest mishap, I decided I should probably get dressed.

Jonathan was happily reading, OK playing with his books in his cot so I had the time this morning to slather on some industrial strength makeup. My husband often trots out the ‘you don’t need to wear make up’ line, and while it is always nice to hear that the person you love thinks you’re beautiful, it’s a little wide of the mark. Sure, I’m not wearing it to make myself look *worse* but it’s not about it being a mask to hide behind so much as a coat of armour helping me face today.

The me on the left was feeling washed out, cried this morning, and doubted herself about continuing to co-sleep when her son’s sleep has been so bad lately. She felt irritated about having lots of meetings to go to this week, wished it wasn’t Sing & Sign, and thought about how there aren’t enough hours in the day.

The me  on the right decided she was off to Waitrose before Sing & Sign to buy some cake for a playdate later, and to get a nice coffee. She was looking forward to hanging out with some new friends later, and watching J pace the church hall at our class like a caged lion, every now and then deigning to clap the grown ups singing. She felt proud of managing work, council duties and motherhood.

She just didn’t fancy showing the world those struggles and worries today.Some days she goes out with no makeup, avocado in her hair, and snot which is somehow on the back of her top. Others it’s the nice uncreased clothes and a bit of lippy.

A makeup bag might not seem like an arsenal to some people, and it’s not one that everyone needs, but for me my Warpaint gives me confidence. Obviously it’s an over-simplification to suggest that 5 minutes putting on some slap resulted in a complete turnaround in my mood. Caffeine and WhatsApp chats were also at play. I guess what I am trying to say is that on the days when motherhood feels like a battle, remember you are actually a Badass Warrior and arm yourself however you choose.