This is a post I have been trying to write since Thursday. I feel like maybe I should start with some sort of ridiculous disclaimer about this. I wanted to try and write something about how I feel about the murder of Jo Cox last week, but the words just don’t seem to come out right, and I have decided to try anyway. I don’t really have anything to say that won’t have been said by someone else already, and likely more articulately at that.

On Thursday evening when I got home from work, I sat glued to BBC News with tears pouring down my face, trying but failing to play with my toddler who was handing me his blocks and telling me all the numbers on them. It was like I was frozen in horror in front of the TV set; grieving for someone I had never even met. It’s taken me days to not cry when I think about Jo, and even now writing this I can feel tears springing into my eyes.

It feels horribly self indulgent to wonder why this has affected me so much. Is it because I am a Mum of a young child? A young woman involved in politics? A Labour Party colleague? Not that you have to be any of those things to reel in shock from a young woman gunned down and stabbed at her constituency surgery. People are (sometimes justifiably) very cynical about politics and politicians in this country, but Jo was clearly a woman of conviction, compassion, and commitment. Many of us probably didn’t really know who she was until we heard of her shocking death.

Twitter is a funny place to spend time when a tragedy occurs. It initially feels comforting to see others reacting, just purely reacting. An echo chamber for the shock and horror you are feeling. Then the analysis starts, the retweeting of objectionable responses, and before you know it, a young woman’s death and the reasons why is a debate. I’m not going to try and do that. It is hard for me to wrap my head around the fact that someone went to work, to serve their local community, and then that night two young children no longer had a mother to tuck them into bed and kiss them goodnight. What I do feel is worried about the climate of fear, of judgement and of hatred that passes for politics in some corners of this country. Whatever way you feel about the referendum on Thursday, the campaign has stirred up ugliness. A poster was launched the same day of Jo’s murder, with a queue of people, desperate refugees leaving their homes in a long line, and the slogan BREAKING POINT. Violent extremism does not exist in a vacuum. Whipping up fear and mistrust, making people think this country will somehow go back to a colonial paradise if we just shut the door…I don’t think any of us saw this coming, but something was going to break. I reject the idea not to ‘politicize’ this horrific event. There is a difference between exploiting Jo’s murder for a campaign, and acknowledging that a man who gave his name in court as ‘Death to Traitors, Freedom for Britain’ was politically motivated.

In a couple of weeks time I have a local surgery in my ward in Milton Keynes. It’s hard not to think about the safety of the empty community centre I will be sitting in, until residents arrive if they have any issues they want help with. My husband insists he will come with me, but that means bringing our young son with us. My little boy has been out on the campaign trail for general and local elections, he comes with me to surgeries, but I don’t want my response to be fear. I’m going to vote Remain on Thursday, because I believe isolating ourselves is the wrong thing to do. I will continue to work in my local community. I will continue to stand up for what I believe in, in fact sometimes I think I can be too quiet. I will do more to challenge others when immigration is used as a smokescreen for racism. Instead of worry about how bad things are getting, I will do more. When I hear ‘I Want My Country Back’ I will say: ‘No. I want my country back.’ I want a country of tolerance for my son to grow up in.

To that end, you can donate here to a Go Fund Me page set up in Jo’s memory. The money raised will be divided between The Royal Voluntary Service, HOPE not Hate, and The White Helmets (search and rescue workers in Syria).

I haven’t really said what I set out to. I still don’t really have the words to describe how I felt on Thursday night when my son fell asleep and I held him close and thought about Jo and her family. What better way to end than with Jo’s own words then: 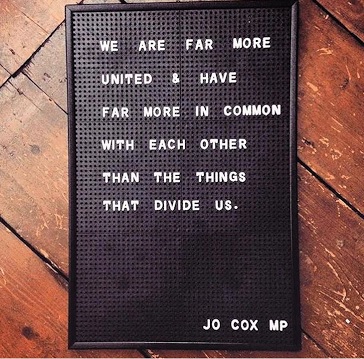